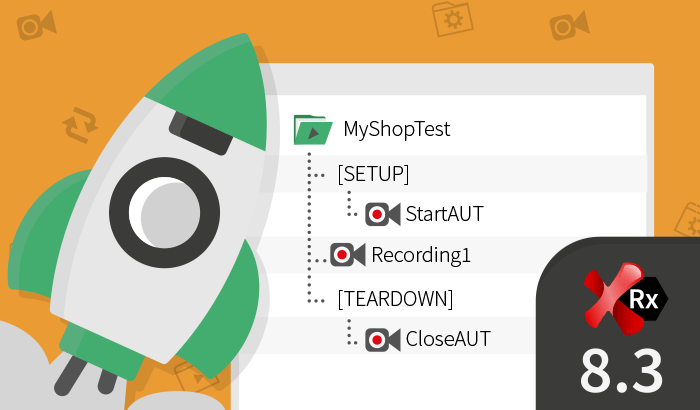 A major goal of release 8.3 is to ensure that new users have a successful first experience with test automation and follow best practices for a robust and sustainable test automation project. To meet this goal, we’ve implemented the three major changes described below:

The RocketStart new solution wizard launches automatically the first time that you open Ranorex Studio, or when you choose “New test solution using wizard…” from the file menu or the start panel.

Begin by selecting the technology that you plan to test. The wizard will walk you through:

After the wizard finishes, a new First Steps built-in tutorial automatically appears, as shown below. This tutorial demonstrates how to automate your first test.

As a result, you are no longer prompted to choose the application under test when you start a new recording session, as was the case prior to release 8.3:

Instead of selecting the AUT in the Ranorex Recorder, now you choose it in the RocketStart new solution wizard.

Setup regions are always executed before anything else in the direct parent item. It’s a best practice to populate the setup region with the modules and module groups needed to bring the AUT to the state required for the following modules to run, such as starting the AUT.

Teardown regions are always executed after everything else, or when an error occurs in the direct parent item. Here the best practice is to populate the teardown region with the modules and module groups needed to clean up the AUT after a test run, such as closing the AUT.

Following these best practices will help you set up robust and sustainable test automation projects. When creating a new test case, always keep in mind to include a clean startup and shut down of your application(s) under test, with all of the cleanup tasks necessary for an error-free next test run.

For an overview of a more complex test suite, refer to the desktop sample provided with Ranorex Studio.

As you can see in the screenshot above, there is a setup and a teardown region for the smart folder “AddNewEntry”. The setup region contains a module group which starts KeePass and logs in. The teardown region contains a module for saving the changes and a module for shutting down KeePass. The same goes for the test case “AddNewGroup”: a start and login module in the setup region, and a save and shut down module in the teardown region. In this test suite project, we also have a teardown section for the entire test suite. As you can see, whether or not the entire test succeeds, the modules in the teardown region will execute, thus cleaning up the previous test run.

When you are planning an end-to-end test spread over several different technologies, it is useful to separate the different technologies into individual projects. Simply create a module library project for each technology or app that you are testing and combine the execution of the generated modules in one test suite project.

Open the sample cross-platform solution for an example.

As you can see, there are several module library projects – one for desktop, one for web, one for iOS and one for Android. Additionally, there is a test suite project called “CrossPlatform” that combines the modules from the different projects together in one big test suite.

There are setup and teardown regions for all test cases in this test suite, which perform startup and cleanup actions for the different technologies using the modules from the technology-specific module library projects.

Last but not least, we have polished our Recorder control center to give you more control during the recording process. The recorder now displays a history of the last four actions, providing instant feedback during recording. You can delete recorded actions right in the recorder or add new ones using the recorder’s controls, making your recordings even more effective right from the start.

To learn more, check out our user guide. You can also register for a free webinar on October 11, featuring a live demonstration of the new features in Ranorex Studio 8.3.