Back to RANOREX.COM FREE TRIAL

Commandline option nice to have /listconfigs

Commandline option nice to have /listconfigs

I'm struggling with a test change I made, I'm testing a Windows application, and when I added a new runconfig, the tool is doing something very unusual. The new runconfig is a copy of another one, but with some steps at the end removed. I have decided to split the tests into a *_SiteOnly and a *_Catalog configuration.

Here is the commandline and the logger output:

It's doing something crazy here, its running my suite, but none of the test-cases in that suite seem to be "enabled" or run because they just get skipped, so I end up with a "do-nothing" test log that succeed, but as you can see from the terribly short log actually did nothing. The test-case 'siteCreationTest' should take about 2 minutes, because it must spawn a process as well. The tests are enabled in my runconfig, but because it's not output in the logs, it's hard to tell?

1. Why is the runconfig not displayed in the logs? can I enable that somehow?
2. Can we get a commandline option /listconfigs? It's not really going to help here, but might just make eliminating other causes of trouble for someone else later.
pros:Powershell automation guru
cons:UI automation hacker/n00b
Conrad Braam
Top

At first, what version of Ranorex do you use?

As for the run configuration name, there is no option to enable it in report, but you can use this code to display it in report...

Just create a new code module with the above code and add it to [Setup] section of your test suite.

As for your problem, are you sure the rxtst file is updated in the target bin folder? Simply make sure, the rxtst file really contains the copy of mentioned run config with enabled all necessary test cases.
Pavel Kudrys
Ranorex explorer at Descartes Systems

Hi Pavel.
I'm pretty sure that is closer to what is going wrong. My test-case is just not even running, i can see it in the runner. 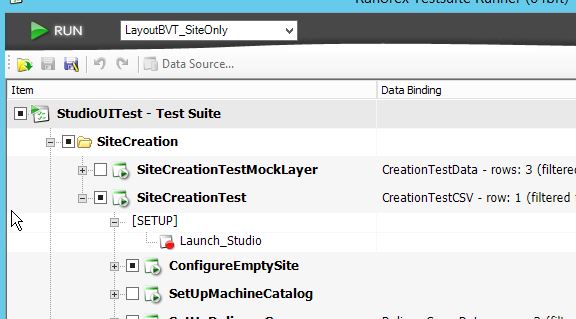 I'm on version 5.4.5.19886. Things have been fine for about 2 months since I upgraded, if we get things working, we will get a chance to try out 6.0 .
The [setup] fixture pictured above has some user code (by the way, neat logging trick there, I'm going to make that change later too.)

but the logging never appears in the log, so I get the impression my code and modules are not even getting called.
pros:Powershell automation guru
cons:UI automation hacker/n00b
Conrad Braam
Top

I'm afraid, I don't have a clue what's going on here. It sounds like a corrupted rxtst file? Have you tried to build and run both 'debug' and 'release' version of your test? Have you examined what's checked (if anything) in ConfigureEmpytSite, which is collapsed in you posted screenshot?

BTW, I noticed, that you are using report name without specified extension...

There is fixed a bug in 6.0, related to not created report file (in case of missing 'rxlog' extension in command line). But it's most probably not related to your run config issue

Source of issue found!! all my fault.

I wrote a script to copy the binaries across to the target machine - and some changes to that script are messing up because I corrupted one of the input CSV data files. It looks like providing a weirdly corrupted input CSV file can produce silent failure, but it got caught much farther along anyway. (File contained unicode, had a broken byte-order mark and was pretty much not a CSV file anymore.)

But the tip to print the runconfig out is something I can use here.