On this page, you’ll learn how to manually run an executable build in a remote runtime environment, i.e. on a machine without Ranorex Studio installed. This means that you’ll transfer the executable build to the target machine, run it there, and retrieve the report yourself.

Running an executable build through a Ranorex Agent simplifies and automates a large part of this process. This is explained in ⇢ Ranorex Agents and ⇢ Agent-based remote execution

Before you can run your executable build on a remote machine, you need to copy it there first. We recommend doing so as follows:

Ensure your test is configured the way you want and so it will run on the remote machine. You won’t be able to change the deployed test on the remote machine unless you install Ranorex Studio there or use command line arguments, which only offer limited ways of adjusting test execution.

Ensure all required files are ⇢ included in the project and configured to be copied to the output folder.

⇢ Create a new build of your project.

Navigate to the output folder (bindebug) and add it to a ZIP archive.

Copy this ZIP file to the target machine and unpack it. You can now run the test.

You can run a test either directly on the remote machine or via a remote desktop connection (e.g. through the Windows RDP). The basic process is the same:

Deploy the executable build to the remote machine and unpack it, if you haven’t done so already.

Run the test in one of the following ways:

In the output folder, double-click the test executable (<test name>.exe, e.g. Introduction.exe in our example).

⇢ Open a command line interface  and run the test from there. This way you can also pass arguments to customize your test run.

Executing a test in a runtime environment requires at least a Ranorex Runtime Floating License. You need to ⇢ include the license’s information in the executable build.

Also make sure your remote machine is connected to the same network as your server where the Ranorex License Manager is installed, so the remote machine can lease the required license. Otherwise, the command line interface will display the following error message:

If you don’t have a license, you can install the free trial license of Ranorex Studio on the remote machine to run the test.

When running a test remotely, a report is created in the same way as when running it from Ranorex Studio. This report and its raw data file are stored in the Reports folder of the unpacked output folder of the executable build on the remote machine. 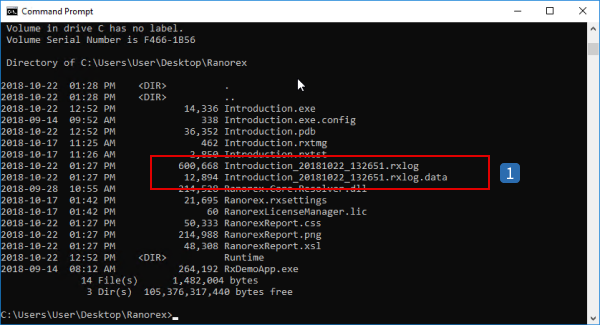 Report file and raw data file. You can move the report files to your main system where Ranorex Studio is installed and view and process them there.
← Command line execution Ranorex Agents →