Use the powerful Ranorex automation framework to write robust tests for your iOS app.

Run on any iOS device

Design your test once and reuse it across iPhones & iPads

Are you equipped to tackle mobile testing challenges?

The iOS market is less fragmented than the Android market due to Apple’s control over its operating system and devices. But despite Apple’s efforts to get users to upgrade, two months after iOS 11 was released only 20% of Apple devices had been transitioned to the new OS, with about 65% on iOS 10 and the remaining devices on even earlier versions. Multiply the various iOS versions by the variety of iPhones and iPads in use, and the result is an abundance of platforms that must be tested. To ensure that your application meets user’s expectations for performance and quality, and that it will pass the Apple App Store’s strict review guidelines, consider aspects such as:

Enhance robustness and reliability of your iOS application with these Ranorex Studio test automation capabilities.

Perform iOS automation testing with the Ranorex Studio test automation framework. Due to the powerful RanoreXPath query language, your automated iOS tests can withstand layout changes without breaking, and can instantly be reused across devices with different screen sizes and resolutions.

Simulators or real devices – each has its pros and cons for automated testing. As you know which option fits your needs the best, you can choose where you want to test your native, mobile web or hybrid iOS application, and simulate real user interaction such as “validate”, “touch”, “swipe” and “change orientation.”

Ensure a high user experience of your iOS application, regardless of whether it is installed on an iPad, iPad mini, iPad Pro or iPhone X / 8 Plus / 8 / 7 Plus / 7 / etc., and include device-specific information in your automated tests. Access information such as battery, memory, and CPU state as well as calls and text messages stored on a device with Ranorex.

Simply connect Ranorex Studio to your mobile iOS device – iPad or iPhone – using the connection type of your choice: wireless or USB.

You don’t have to jailbreak your device. Without entering the XCode environment, you can connect your application with Ranorex Studio using our instrumentation wizard.

Instantly perform automated testing with our codeless and code-based automation tools. The easily understandable report gives you a detailed overview of the test execution flow.

Why use Ranorex Studio for iOS application testing 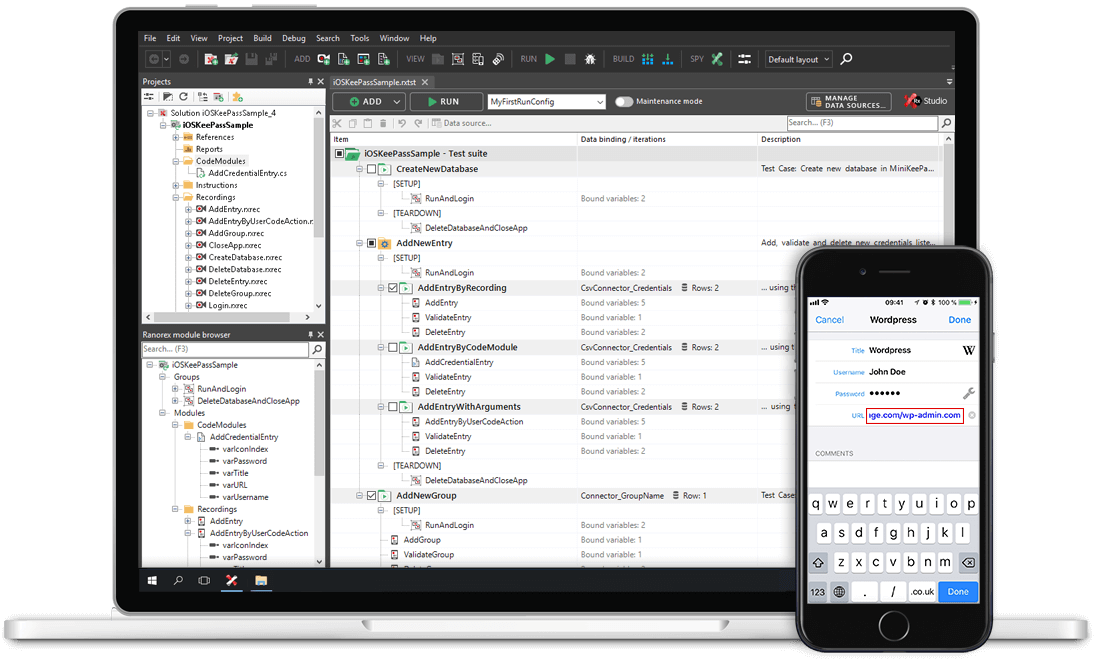 Ranorex supports testing of native, hybrid, mobile web as well as cross-platform apps. The powerful test automation framework, with its tools for coded and codeless test automation, enables teams to improve testing efficiency regardless of their test automation expertise. While you do not need programming skills to create automated tests using the instant tracking functionality of the Ranorex Spy, you can edit recordings or write tests entirely in code using the API for C# and VB.NET. As the lightweight test automation suites and JUnit-compatible reports can easily be integrated into CI/CD environments, you can fully leverage the benefits of agile software development and speed up your software development lifecycle. Using the Ranorex automation framework, you will also benefit from:

Easily add validation steps to your tests to see if your mobile application looks and works as expected. Ranorex Studio’s award-winning object recognition enables you to reliably validate control attributes, and compare texts as well as images.

Ensure consistent functionality across iPhones and iPads, and increase your return on investment: Once you have designed your tests with Ranorex Studio, you can instantly reuse it across devices, versions of operating systems and browsers.

Ranorex Studio uses the open-source mobile testing framework Appium to automate testing in native browsers. This way, you can test your mobile web app directly in native Safari on iOS and not on an instrumented third-party browser app.

Run regression tests with each update to your application to ensure changes do not break existing functionality. As test suites seamlessly integrate with continuous integration servers, test cases are automatically started as soon as new code is committed.

Maximize productivity and truly make every second count with parallel test execution. By simultaneously running mobile tests in different environments, you can maximize test coverage and get faster feedback on the quality of your application under test.