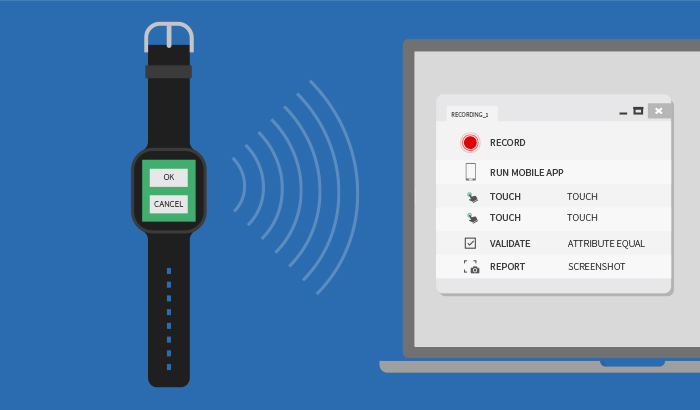 Smartwatches are no longer a second screen to the mobile device. This year, Android has released their marshmallow version for Android Wear, adding yet more features to the smartwatch. Likewise, also developers seem to be kicking it up a notch. It’s no stretch to say that testing will have to adapt to a wearable mindset to face these new challenges. We proudly announce that Ranorex supports Android Wear testing. As always, you can rely on us to stay prepared and stand your ground on the consumer market. But first things first. Let’s start with why smartwatches are such a hot topic in 2016.

Getting off the starting blocks

It seems that fiction is about to become reality. Gadgets are already used to ease our life in almost every area – be it health, entertainment or personal organization. In their February 2, 2016 press release, Gartner* predicts that “274.6 million wearable electronic devices will be sold worldwide in 2016, an increase of 18.4 percent from 232.0 million units in 2015 (see Table 1). Sales of wearable electronic devices will generate revenue of $28.7 billion in 2016. Of that, $11.5 billion will be from smartwatches.”

It’s a given that vendors want to throw their hat into the ranks and join the game. More vendors provide users with plenty of options to choose from. And with the rise of wearables, the pressure’s on for developers. So what does it take to be successful?

The game’s on for smartwatches

Naturally, users expect both hard- and software of smart wearables to function flawlessly. But smartwatches have to be more than just an expensive secondary screen to a mobile device, merely saving the user from getting the phone out of the pocket. They’ve got to be useful. Today it’s all about user experience to keep the excitement going. As customers are presented with an ever increasing choice in smartwatch products, the challenge is on for app developers to provide the best use case and the most appealing functionality. The question of how you can make your app an incentive for using a smartwatch goes right in hand with one question: How can you best react to arising challenges when it comes to smartwatch app testing?

In for the win – with Ranorex Android Wear testing

When it comes to testing an Android smartwatch, challenges are definitely usability, device fragmentation and dependency on a mobile device. Here’s a short overview of how Ranorex can help you deal with these challenges:

Smartwatches come in all forms and sizes. Software has to be able to adapt quickly to ensure highest usability in this ever-changing market. Considering that Android Wear supports square as well as round displays and screen sizes go as small as 1.3 inches, this is definitely a challenging task for developers. With such a restricted screen size, software has to be functional and easy to use. At the same time, it has to be highly adaptable to be appealing and thus desirable no matter the form or screen size.

Ranorex is flexible
With Ranorex, it doesn’t matter which Android Wear smartwatch your app will later be used on. Record your test once and run it on different Android Wear watches. How? We know that test scripts have to be reliable and robust to ensure high quality software. That’s why Ranorex doesn’t rely on a coordinate level, but uses the powerful RanoreXPath to uniquely identify even dynamic user interface elements on your Android Wear device, making your test scripts robust against UI changes.

Smartwatches aren’t (yet) a standalone gadget, but are highly dependent on a mobile device. This is why you’ll also need to test your smartwatch app on a mobile device – be it mobile phone or tablet. And who knows what’s yet to come. The many possible use cases arising from device fragmentation will definitely pose a challenge.

Ranorex offers an all-in-one license
We’ve got good news. You only need one license to test any kind of mobile, web or desktop application with Ranorex. You can test your app on your mobile device and on your smartwatch. Should you decide to venture out and perform additional cross-technology testing, we’ve got you covered: you can reuse your GUI test script across multiple devices. You also don’t need an additional license to use the wearable testing functionality. No additional license means no additional costs. So all there’s left for us to say is: happy testing.

As we’ve mentioned in our 2016 Test automation trends blog post, time pressure is an imminent factor when it comes to releasing software, while providing highest quality software remains a prerequisite to compete in the fast-growing wearables market.

Different automation approaches and integration into existing testing environments
Working together in teams is essential for a timely release. As Ranorex offers a broad set of automation tools, every member of your testing team can feel comfortable working on a test automation project. Ranorex is more than just a Capture & Replay tool, but a software that supports collaboration between developers and testers. While you don’t need any programming skills to create robust and easily maintainability tests with the Ranorex Recorder, developers can add further functionalities or create new test automation projects entirely in C# and VB.NET.  You can also seamlessly integrate Ranorex into any development environment, using CI and version control systems. Additionally, our latest major software update, Ranorex 6.0, comes with functionalities that make working in teams even easier: Remote testing, Git integration, code editor enhancements and many more features you’ll definitely love.

Do you want to know more about how you can test your Android Wear app with the Ranorex mobile testing tools? You can find detailed instructions in our Android Wear user guide section.