In many cases, custom Windows Forms or 3rd party provided controls are not built with accessibility in mind. It is often overlooked that by adding this functionality one does not only help those who are dependent on good accessibility, but that it also enables automation (and automated testing) of the control in question.

In the following example, I would like to show that in Windows Forms it is quite easy to add accessibility functions to an existing control, even to a rather complex control like a tree view. The control used in the example is the TreeViewAdv, a quite popular open source tree/list control. But please consider that also other complex controls like data grids or list views from other 3rd party vendors (Infragistics, DevExpress, Syncfusion, ComponentOne, Telerik, Janus, …) can be extended the same way as described within the following scenario.

Although it is quite nice to use, it lacks an accessibility implementation, rendering its content totally opaque to most automation tools. (Using Ranorex’ remote invocation capability, one can still extract data from the control, though.)

Here is an example of the control filled with some test data. You can see that in addition to a standard TreeView the TreeViewAdv can have columns as well: 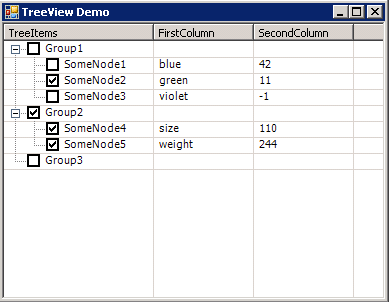 In its original form no information about the content of the control is available. To support automation, we are going to add the following accessibility features:

Let’s have a look at the necessary code. First, a reference to the “Accessibility” assembly, which is part of the .NET framework, has to be added. This assembly provides a managed wrapper and a number of utility classes around the COM-based Microsoft Active Accessibility (MSAA) layer.

MSAA has been around for some time now and is understood by most screen readers and automation tools. It has been superseded by UI Automation, which is especially suited for WPF applications, but still comes in handy for Windows Forms and MFC/ATL applications.

For our tree we will provide three classes, all deriving from AccessibleObject:

Accessibility functionality is then implemented by overriding a number of properties and methods to provide useful information and functionality to an external application. Here is a short overview of the most important properties which need to be implemented:

Here is a part of the AdvNodeAccessibleObject implementation:

This might look a bit complicated, but if you are familiar with the control you are extending, most accessibility properties and methods can be implemented in a rather straightforward manner.

The whole implementation for the TreeViewAdv control accessibility support is only about 300 lines of code and a few hours of coding time, but it makes a huge difference in terms of automation. 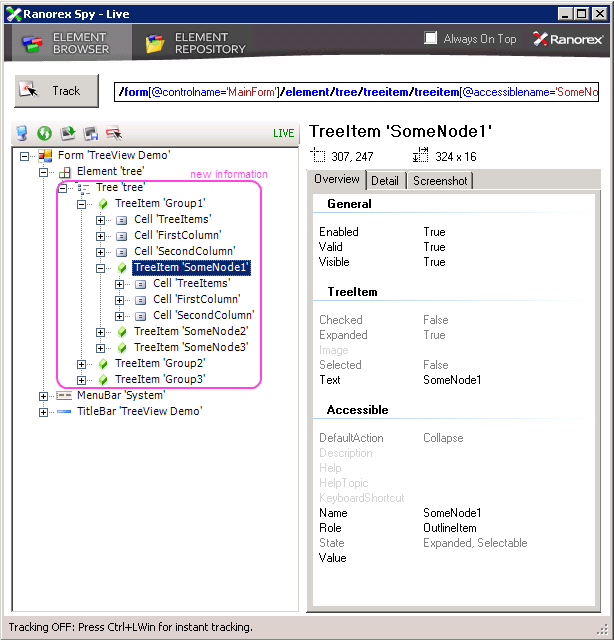 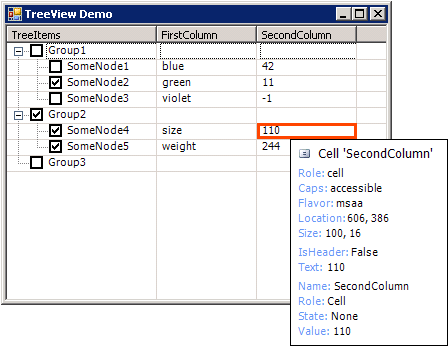 As you can see from the highlighted area on the first screenshot, it is now possible to look “inside” the control. This helps a lot when performing automated data entry, content validation, behavior checking, screen scraping, etc.

You can grab the source package with the accessibility addon for TreeViewAdv and the simple demo app here:

More information about the Windows Automation APIs can be found here.

Join us for a live webinar on April 21 Automated Test Reporting with Ranorex Studio Register now No thanks, I am not interested