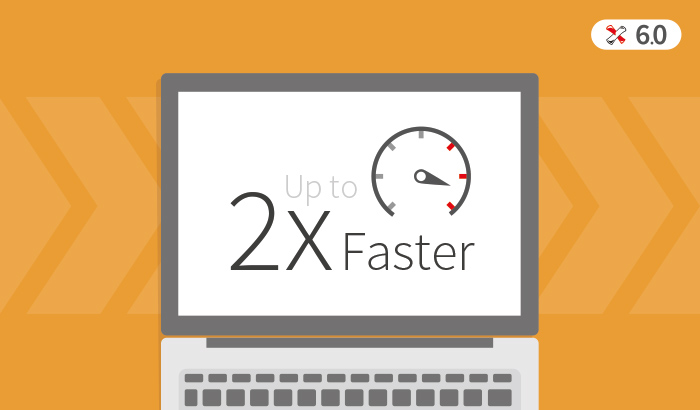 You don’t want your automated test to take longer than it has to. Fact is, the debugger directly affects the test execution time. That’s why in Ranorex 6.0 tests run without debugger by default in Ranorex Studio. Simply press the ‘Run’ button – no administrator privileges are required – and start saving time.

We know, only hard facts count. That’s why we’ve conducted a comparison, running a test with and without debugger, so you can see the benefits of the new default setting for yourself.

Up to twice as fast test run in Ranorex 6.0

Test environment and data
We’ve used the Ranorex KeePass sample, one of our sample test solutions delivered with Ranorex Studio, so you can easily reproduce these tests. All test cases were enabled. To omit static delays which could influence the test results, we further activated the Turbo Mode for all recording modules. We ran the tests in two setups. In the first, the computer was in an idle state. As in everyday work life, however, a machine usually has to juggle multiple processes, we simulated a 100% CPU load with a CPU Burn-in in the second setup.

The results clearly show that when your computer is in an idle state, the new default settings merely reduce the test execution time by 5%. However, when you’re using your computer to the full capacity, your test will be twice as fast now. These two scenarios represent two extremes, with a realistic CPU usage being somewhere in the middle. One way or another, one thing is clear: this new default setting will definitely save you time. Especially if you’re using an older system, you’ll see significant improvements in execution time.

When to use the debugger

Debugging is important. You just don’t want the debugger to be part of your test execution by default, but use it legitimately, and only when it really does make sense. So when you do need it, you now simply have to press one button to enable the debug mode. Using the debugger, you can set breakpoints directly in the Ranorex code editor to intercept the test run at predefined positions. This allows you to look at specific steps more closely and perform manual interactions. An important note on the side: Please don’t forget that previously set breakpoints will be ignored in the new default run mode.

System specifications
We’ve conducted our tests using a virtual machine setup on a host machine with the following specifications: