While competing in the exacting modern software market, many companies find  integrating automated testing into their overall testing process beneficial. This guide will help you better understand the different types of automated test solutions and how developers...

The Purpose of Verification and Validation in Software Testing

Software testing evaluates a new application to ensure it operates as intended once it hits production. Setting up a test plan for software helps prevent bugs, lower development costs, and improve application performance. People depend heavily on software and...

API vs GUI: What’s the Difference?

Lots of acronyms are used in software development, and it can be easy to get confused when you’re starting out. APIs (Application Programming Interface) and GUIs (Graphic User Interface) are often misused as they have similar functions. However, they work in very...

Antares Vision is dedicated to protecting products throughout their life cycle, delivering comprehensive solutions in Track & Trace, Inspection, and Smart Data Management for critical industries including pharmaceuticals, medical devices, and food, as well as beverage, cosmetics, and others.

The software testing team consists of 8 engineers with testing backgrounds including ISTQB certification and development skills related to testing development. The team is partly remote and partly at the main office in Brescia, Italy, 100 km east of Milan. The team is led by a Software Testing & Test Automation Manager, who described his team’s use of test automation for this case study.

The team needed a maintainable & scalable test automation solution that supports virtual environments and test execution in parallel, reducing the time required to complete a test cycle. They chose Ranorex Studio to be the validation point in their build and release process.

The company’s distributed team of test engineers must plan for testing in an environment where the number and size of releases in a given period depends not only on technical aspects, but also on commercial agreements with customers and the business model of the customers themselves.

The test environment must simulate the real production environment, even though customer might have multiple versions of their software installed across production sites. Testing on physical machines limits the possible configurations and the number of production scenarios that can be tested.

With a goal of adopting a more agile process, the team is in the process of building out a Jenkins CI/CD pipeline. In addition, they have created an internal virtual environment to reproduce the customer environments, built on custom hardware using VMware as the virtualization environment.

The company provides its customers a wide base of generally-applicable solutions, which it customizes to meet each customer’s unique requirements. These include adaptations for customers’ existing premises, environment, and production needs, and range from slight changes to the core behavior of software to more extensive modifications.

“We use Ranorex Studio to automate functional and regression tests. Furthermore, we leveraged the implementation of an automated validation approach toward our customers, reducing significantly the IQ-OQ costs and time.“

Prior to adopting Ranorex Studio, the main challenge for the team was to set up and reproduce a test environment that simulated the real production environment. At any given time, an customer might have multiple versions of their software installed across production sites, due to issues such as the time required to implement a new version or regulatory approvals. But testing on physical machines limited the possible configurations and the number of production scenarios that could be tested.

Now, the team can run multiple configurations in parallel, as well as multiple software versions on the same configuration. Either approach saves time and spreads test coverage among multiple possible platforms.

The  team has also extended their test coverage significantly. “We are able to control and pilot all the applications simultaneously, because we instruct Ranorex Studio to do so”, explained the team’s manager, rather than having “4 or 5 people clicking manually in multiple locations.”

Executing tests in a virtual environment brings many advantages: the test engineers can connect the test environment remotely, without restrictions for the availability of hardware; and the system is qualified by a simulated production environment, using test data similar to real production data.

As a result, the team was able to achieve a 30% increase in testing productivity. 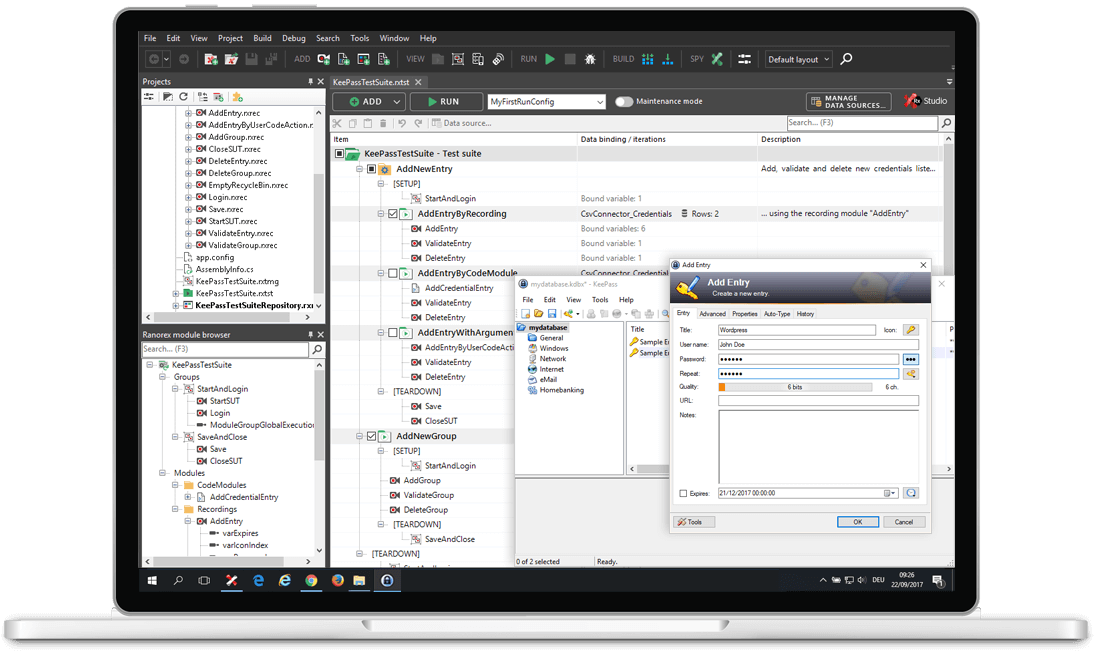 “The most evident change that has been introduced with the design of the virtual environment and the usage of Ranorex in the process is that we have absolutely abstracted the testing phase from the hardware, so that we are able to reproduce in principle any type of production scenario in this virtual environment.”

The immediate goal of the team is to fully adopt a CI/CD pipeline, thanks to the confidence that they have in their testing approach. The team primarily tests the UI through tests written in code rather than using recording modules. As the manager explained, “we used recording at the very beginning when we started to test the tool itself. We were not sure the extent to which we could control the application and the UI…. Recording is a good base when you have some problems in capturing objects or you don’t really know the exact syntax of some of the commands, etc., so passing through recording and converting to code can help. But on the other hand, we have developed a quite good set of libraries to abstract the object repository layer from the code. This allows us to maintain a test unaltered even when the XPath or the object itself changes. We are now in a situation where the same test is portable from a desktop application to a web application, or vice versa.”

“I would recommend Ranorex Studio in situations similar to ours, where you have a large number of configurations and applications to test at the same time, and you have the possibility to integrate into the capabilities of Ranorex your own testing classes that use the basic functionalities of the environment that add the specific value that is necessary to approach the test that you need to execute.”

To learn more about how Ranorex Studio can help solve your testing challenges, contact a member of our sales team.
Download free trial